A FEW NOTES ON THE SPEED CONTROL BOARDS USED IN THE WM180,  FITTED TO MY DORE WESTBURY MILLING MACHINE AND USED IN "REAL BULL" MINI-LATHES.

The speed control board in my lathe bears a sticker saying it was made by Best Controls in Taiwan, I think it is a clone of an old version of the KBIC-240 board from KB Electronics in the US which I fitted to my Dore Westbury milling machine. Modern KB boards have many surface mount components, whereas the Best Controls version uses traditional components with leads.

If a complete new board is required, I'm sure a KBIC-240 would be a good replacement for the Best Controls version in my lathe. The KB Electronics website gives a list of UK distributors - specify England, rather than UK, when searching. Prices seem to vary (in August 2010) between £65 and £75, depending on the supplier you choose.

But it may not be necessary to pay out around £70 for a complete new board . The usual parts to fail on these controllers seem to be the SCRs and power diodes bolted to the upstand at one end of the heatsink. The manual which came with my KBIC controller in late 2009 contained a full (but out of date; it does not relate to the modern board with surface mount components) circuit diagram, components list and parts placement diagram. The manual on KB’s website  http://www.kbelectronics.com/manuals/kbic_manual.pdf no longer contains a circuit diagram; they seem to have decided to make DIY repairs difficult.  However, see the update further down this page. 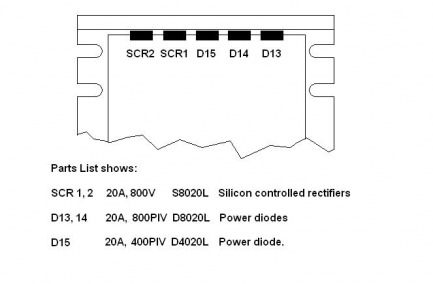 This shows the location of the SCRs and power diodes, together with the component listings as per my out-dated manual, which covers six variants of the KBIC board. The components listed here are those specified for the KBIC-240,  KBIC-240D and KBIC-240DS. The corresponding components in the KBIC–120, KBIC-125 and KBIC-225 have different ratings. Obviously, components should not be underrated for the job they are going to do, and the 2HP/1500W motor on my milling machine needs the 20A versions.  My lathe motor is only 550W, and 10A versions (S8010L, D8010L, D4010L) would be perfectly adequate. Of course, it would do no harm to use overrated components, so on my milling machine I could use a D8020L (800PIV) for D15, rather than the D4020L (400PIV). The first digit in these component numbers represents their rated voltage (PIV in the case of the diodes). "4" represents 400v and "8" is 800v. The last two digits represent the rated amps, so "20" is 20A amps and "10" would be 10A. Those are momentary current ratings; the continuous ratings are only about 2/3 of those figures.

As to UK component suppliers, at the time of writing the parts shown in the diagram are available from Farnell. Someone more electronically savvy than  me says the 2N6509 available in the UK from Cricklewood Electronics at low cost is rated at 800V  25A , so is a good replacement for SCR1 and SCR2.  The part numbers shown in the diagram above seem to be used by the manufacturer Teccor, so Googling e,g. “Teccor S8020L” may be helpful. So may googling "Littelfuse" and the part number.

Returning to the control circuitry in my WM180 lathe, I have traced the jumble of wires connecting the various boards, switches etc and prepared the diagram below. I don’t know if all WM180s share the same layout and wire colours, and accept no responsibility for errors and omissions, but the diagram is shown in case it assists anyone. The incoming mains connections are shown as I found them, with Live going to “N in” and Neutral to “L in”. That didn’t present a danger here (the fuse was still in the Live line), but I have transposed them.

Incidentally, the Fwd/Rev switch is placed so that access to its terminals (which are  screw, rather than push-on) is well-nigh impossible without removing it, and its fixings aren't immediately obvious. A thin blade will pop out the metallised label and expose the two screws beneath.

In 2012, I have heard from a gentleman who owns a Real Bull mini-lathe fitted with a genuine KBLC-240D speed control board. That board is a variant of the KBIC-240 mentioned above. It is fitted with SCRs and power diodes of reduced current rating (the motor on the Real Bull is about 2/3 HP), has no indicator LEDs fitted and there are other minor differences, but it is essentially the same board  as the KBIC-240D. So, in case it helps anyone:

By courtesy of Pat Darragh who traced the circuits, drew them and identified the components. 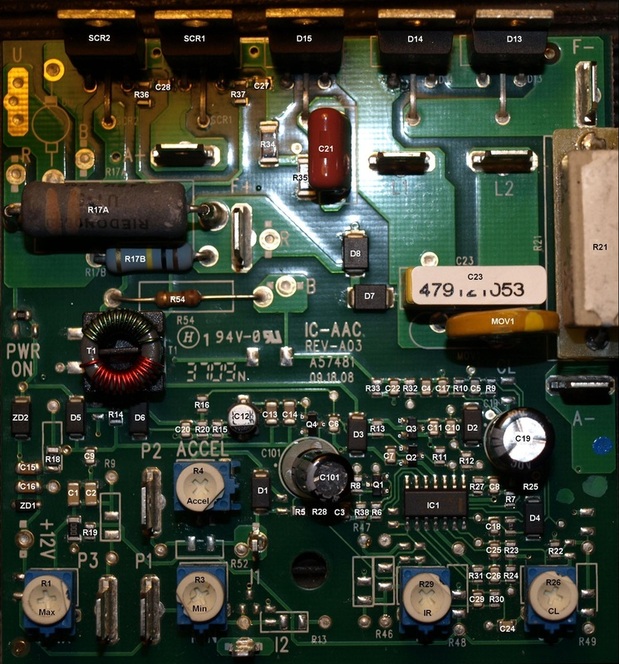