Just a view of the completed demagnetiser. 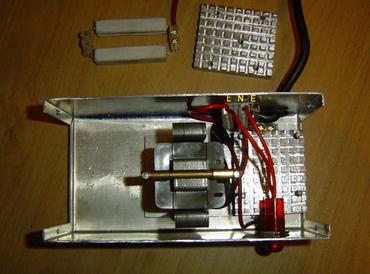 Originally, I planned to put two pairs of paralleled 4K7 restistors in series with the transformer, but that lowered the voltage too much and I wasn't getting enough demagnetising effect. The spare pair can be seen at the top of the pic, along with a home made heatsink. The heatsink inside the box clamps one pair of paralleled 4K7s (giving 2350R) under it. So far, the connector blocks haven't melted, so things cant be getting too warm.

The transformer has a spacer beneath, to raise its top to just below the box lid. The easiest way to hold the transformer in place was a couple of long screws up through the box base into each end of the brass bar, which was turned to fit in the U -shaped trough in the stack of laminations. The trough was already there, as part of the laminations.

The earth lead is moored to the ally box.